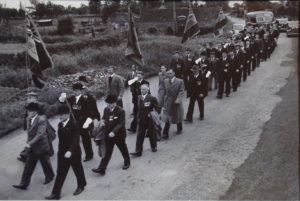 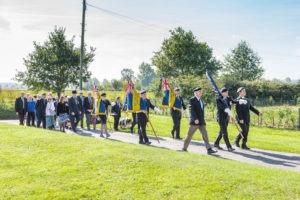 Our small branch fulfills its purpose in support of the aims and objectives of the Royal British Legion as contained in the Legion’s Charter. Any person over 17 years of age who accepts the Legion’s aims and objectives contained in the Charter may become a member. The annual subscription currently is just £17.00. For more information on joining please contact Nick (Cann), Branch Secretary, at The Old Rectory, St Andrew’s Walk, West Dereham, PE33 9RT; email: [email protected]; telephone 01366-501540 (House) or 07900-650090 (mobile/ text).

The inaugural meeting of the Branch took place on 2 November 2013.  This meeting was chaired by the Chairman of Norfolk County, Major (ret’d) Bill Kerr, who is a member of Downham and District Branch. Following this meeting, HQ Norfolk County RBL was  provided  with a list of 16 names from the village who had confirmed their interest in joining. (Note: Any man or woman over 17 years of age who accepts the aims and objectives of the RBL and is prepared to commit to supporting their Branch may become a member.) On 13 February 2014, County HQ confirmed the formation of our Branch, with the number BR 3689. West Dereham previously had been a sub-Branch of Downham & District, with formation in 1955 and closure c1970.

Peter Starling was elected the first Branch Chairman and remains so. His father was the Secretary of our Branch from the 1950s.  Nick Cann (formerly a regular commissioned officer in the Queens Own Buffs/ Queens Regiment) is Branch Secretary. Tom Foy, a non-commissioned officer (NCO) in the RAF Regiment, acts as Branch Standard Bearer. Lorraine Hunt is the BranchTreasurer; Paula Kellingray is the Branch’s Poppy Appeal Co-ordinator; Richard French is the Branch ‘Community Support Officer’ responsible for welfare matters. There are 4 meetings held annually at midday on Sundays in the Village Hall followed by a social activity as follows: March (with sandwich lunch), June (followed by pub lunch), September AGM (with sandwich lunch), November (two-course seated lunch). By the end of our first full year (2014-15), the strength of the Branch has increased to 22. By the end of the second year (2015-16) membership had increased to 28.

The first Branch event was held on 4 August 2014 at 10.00 pm. This was a ‘Lights Out’ Ceremony held at the War Memorial with a reception afterwards in the Village Hall, commemorating 100 years since the outbreak of the 1st World War. Attendance for this event was 40+.

A new Standard was purchased in May 2016 and a Service of Dedication held in St Andrew’s Church on 9 September 2016 with Rev Ken Waters officiating. The Chairman of Norfolk County attended plus representatives from other Norfolk Branches including four Branch Standards. A celebratory lunch followed in the Village Hall attended by 40.

West Dereham has appeared in the January 2017 edition of Royal British Legion’s quarterly magazine – ‘Legion’ – which featured a 2-page article on our Standard Bearer under the title: “The RAF Corporal who carries the Standard for his Branch”. ( The full article can be found here ) Tom carried our Standard at the annual Festival of Remembrance held in the Royal Albert Hall in November 2016 and will do so again in November 2017. In February 2017 at the annual Norfolk County RBL Conference, West Dereham received the CW Lex Cup for Progress and Efficiency by a Junior Branch (in 2015-16). To date, £700.00 has been paid into the Earl Haig Poppy Appeal Fund.

The Agenda for the next branch meeting can be found here.

To view the minutes of the March 2018 meeting click here.

To view the report given at the Annual Parish Meeting in 2018 click here.

Click here to find a flyer about the event on Sunday 14th October 2018.

This website uses cookies to improve your experience while you navigate through the website. Out of these, the cookies that are categorized as necessary are stored on your browser as they are essential for the working of basic functionalities of the website. We also use third-party cookies that help us analyze and understand how you use this website. These cookies will be stored in your browser only with your consent. You also have the option to opt-out of these cookies. But opting out of some of these cookies may affect your browsing experience.
Necessary Always Enabled

Any cookies that may not be particularly necessary for the website to function and is used specifically to collect user personal data via analytics, ads, other embedded contents are termed as non-necessary cookies. It is mandatory to procure user consent prior to running these cookies on your website.